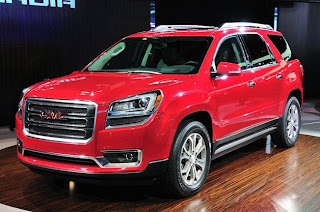 Just this last weekend General motors unveiled their refreshed 2013 GMC Acadia at the 2012 Chicago Auto Show.  The big talk about the 2013 SUV is the redo on the front valance, and GM also added more detailing to the headlights and interior materials to complete the front end.

The ’13 Acadia has a slightly more vertical nose in between two new diffused LED day time lights and HID headlights.  The back end of the Acadia now rocks wrap-around glass and a redesigned spoiler.

GM also kicked it up a notch by adding French stitching and ambient red lighting.

We’ll let you know the second this SUV hits the lot! Stay tuned!